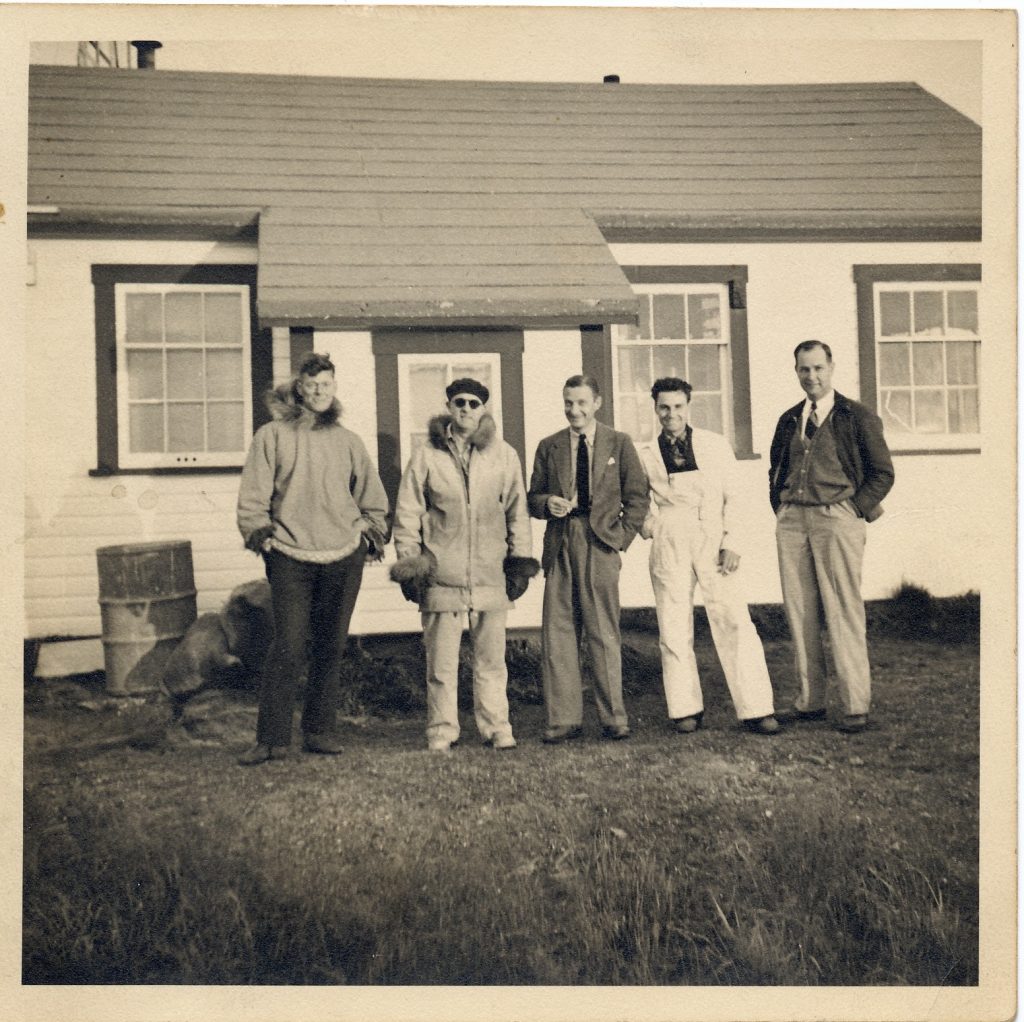 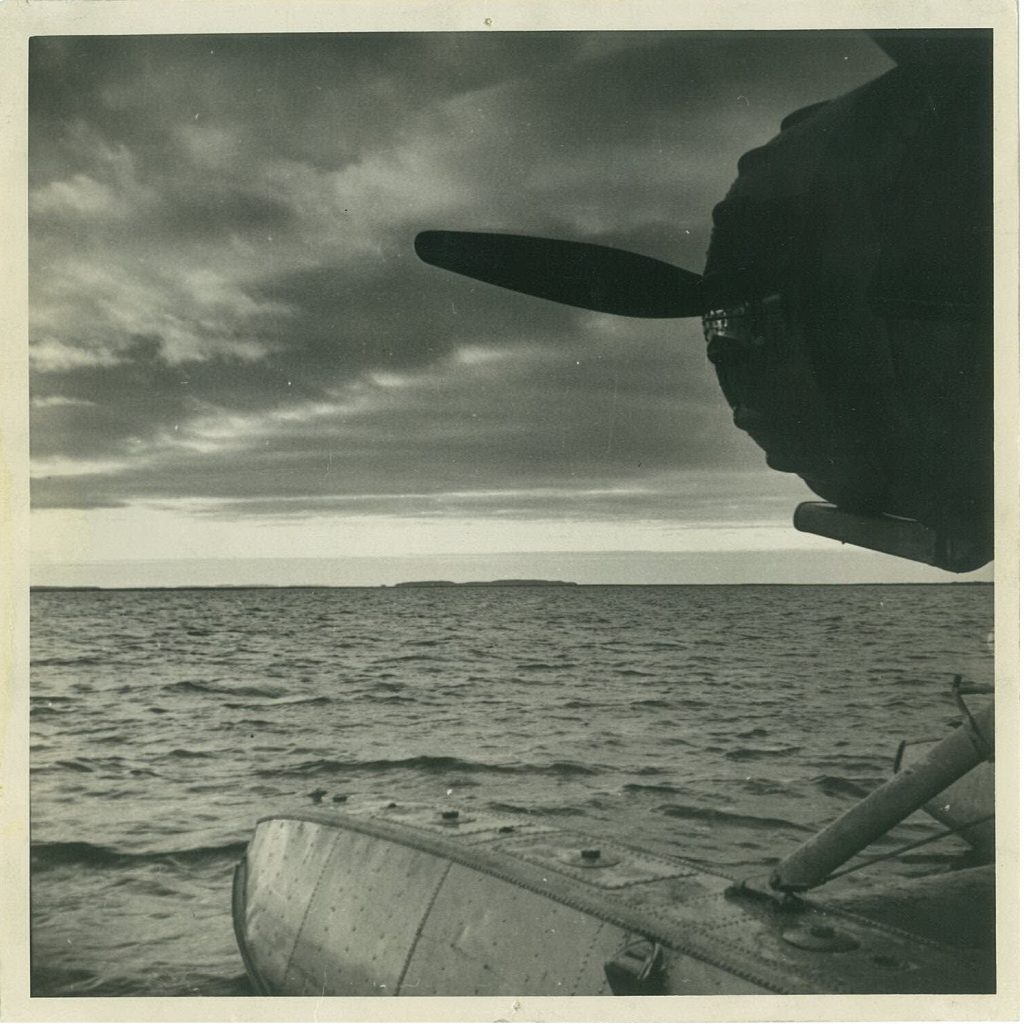 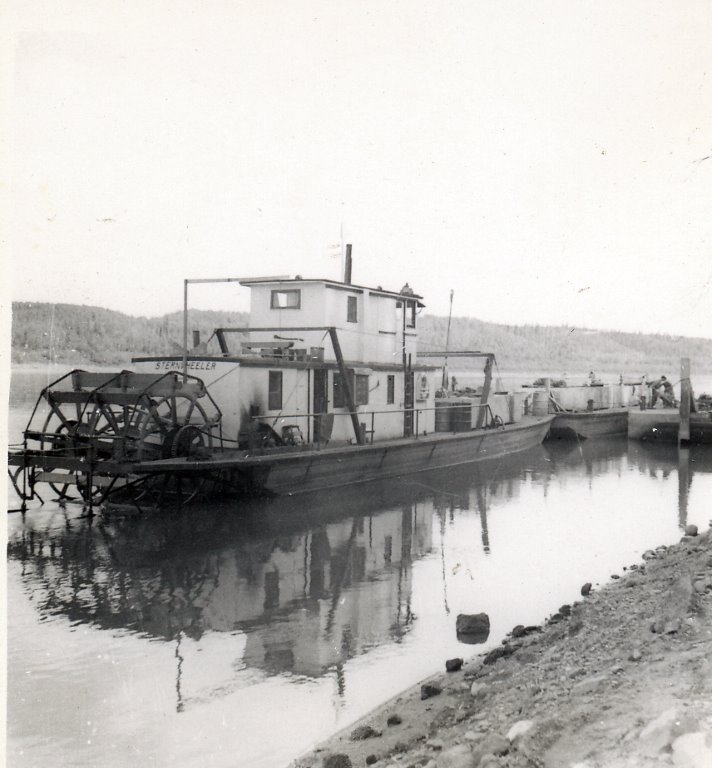 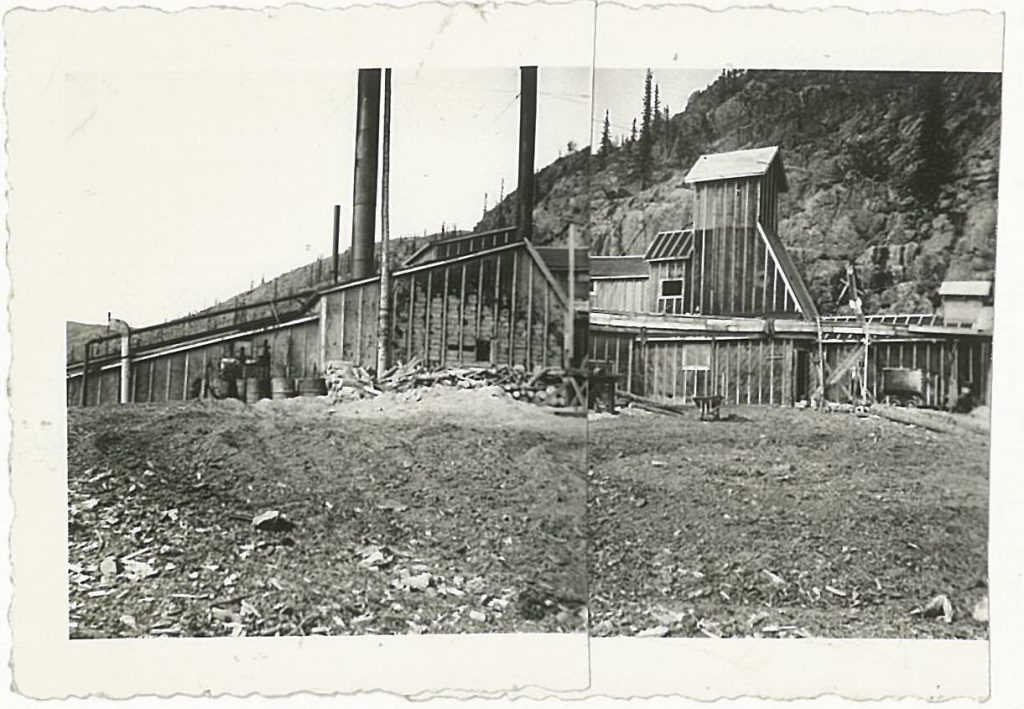 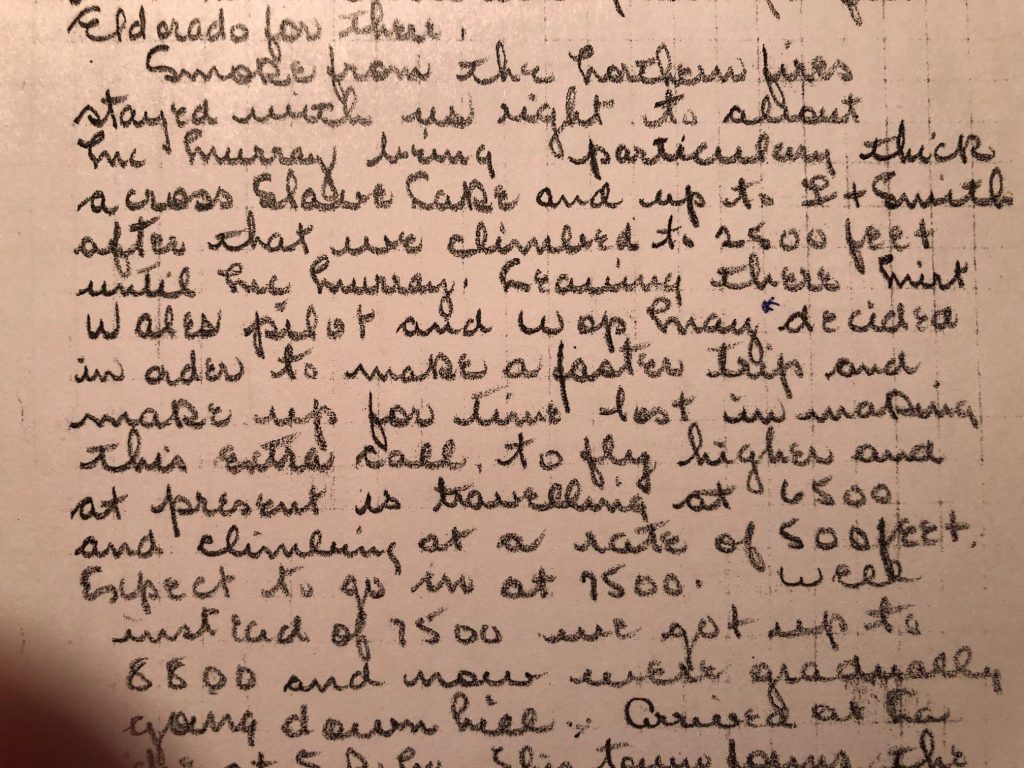 My Father’s Arctic Journal, my most recent quilt project, was written in 1939 and not discovered, by me at least, until my mother died in 1984 (my father passed away in September of 1972).  Wrapped, unsealed, in an old brown envelope, it lay amongst my mother’s estate papers and when I opened the journal, I was flooded with memories of my childhood.  While I’ve never been to the Canadian Arctic, places like Yellowknife, the MacKenzie River, Smith, Norman, Great Slave and Great Bear Lakes, ‘Wop’ May, Eldorado, Echo Bay mines are as familiar to me now as they were when I was a child.  Some old black and white pictures fell out of dad’s journal and as I looked at them, a picture of Eskimos standing on the side of a riverbank looking at the sternwheeler boat, a picture of my dad with his friends and pictures of old mines….I began to see a quilt in my mind.  One day, I thought.

My father worked for Dale & Co. Insurance Underwriters and his yearly trips up to the NorthWest Territories occurred between the mid-1930’s until the year he retired, in 1965.  He inspected client-related locations, buildings, mines and so on, recommending what needed to be done to gain insurance.  Reading over his journal and trying to read his cursive and scriptive writing, which took a lot of time to decipher, I began my own journey up into the Arctic with my dad, cross-referencing maps and information on forts, rivers, lakes, mines, float planes and tugboats.  Sharing parts of the journal with others, I’ve been asked if they might read his journal too, so I am hoping to self-publish My Father’s Arctic Journal, 1939 in the coming year. 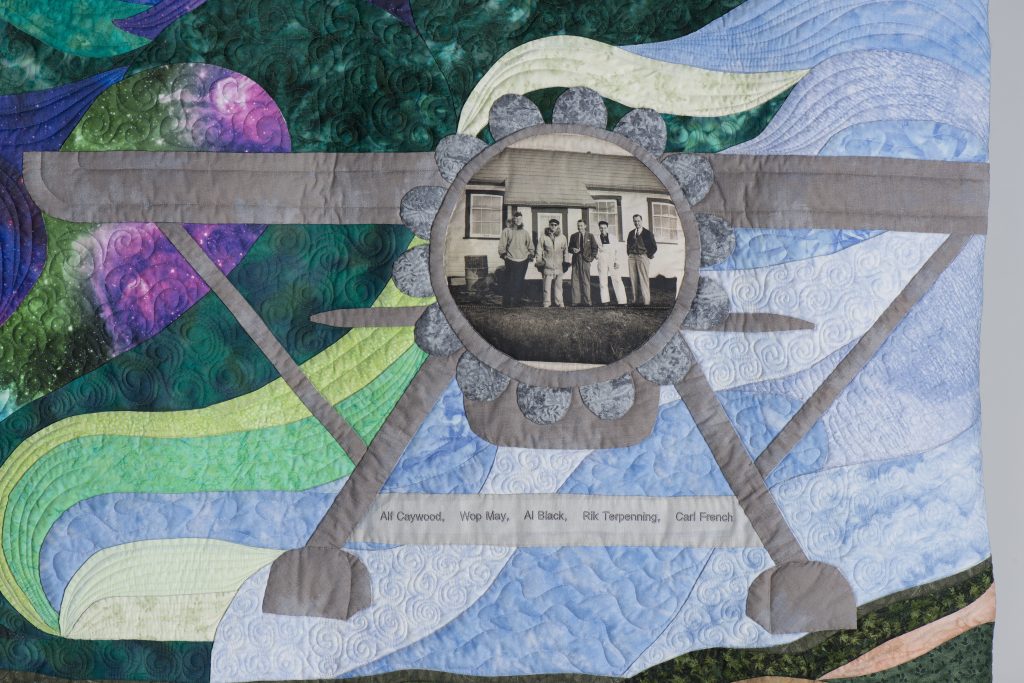 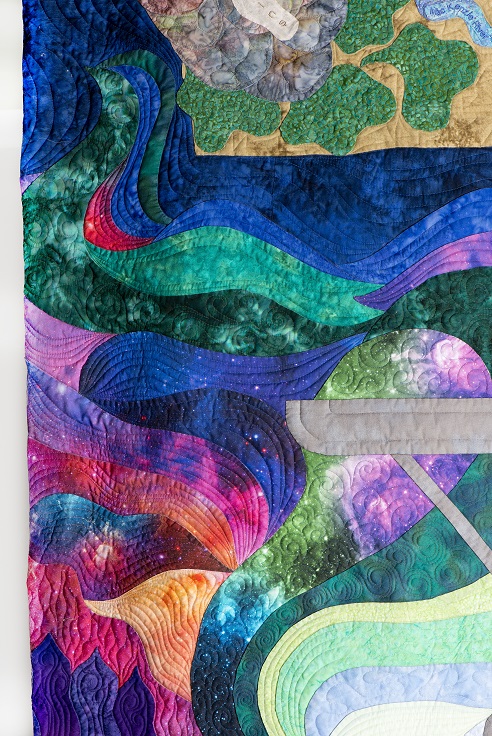 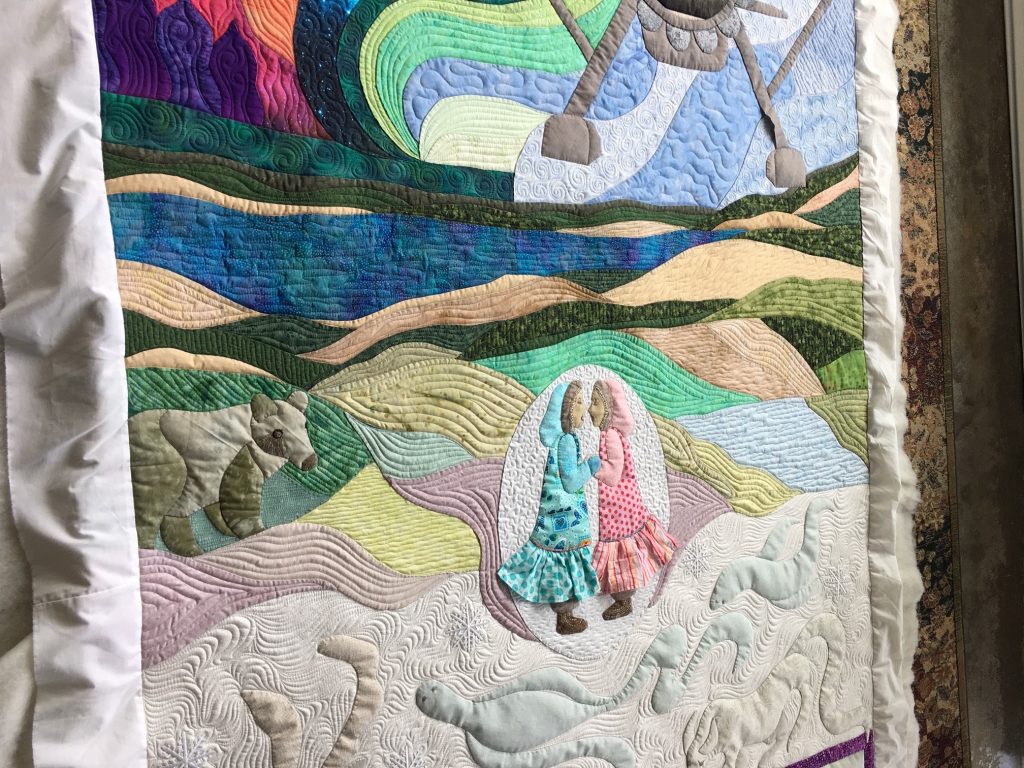 And now to the quilt.  All I can say is that it’s a good idea when you begin to create a design, to know where the design will end and how big the quilt will be.

Also, when I create a quilt design, I like to have some format in mind and for this wall quilt I chose as my format the Oriental Hanging Scroll which goes back in history to the Han Dynasty, in China.  The Hanging Scrolls were read, visually, from bottom to top, the bottom being the nearest in perspective or distance, the top, the furthest.  As I’ve had a good experience with Spoonflower, in North Carolina I sent some of the black and white photos to them and they converted them into cloth for me.  I set the photos in cloth frames across the bottom of the quilt.  Thus, the story of my father’s journal is told, visually, in sections, one above the other, bottom to top as in the Oriental Hanging Scrolls.

The next section above the pictures illustrates the Arctic animals my father saw on his trips….the polar bears, caribou, Arctic fox, sea otters.  I placed them in a misty cloud of soft white snow and framed two Eskimo women, throat singing.  The next section had to be a bridge of colour between the soft, pale values of the animals and the intense colour values of the Northern Lights, thus, the land, water, section is created to allow the eye to travel from light values to darker values of colour.  I wanted as my focal points, the float plane and Northern Lights section.  Uncertain as to how I would interpret the float plane, I toured the McMichael Gallery, in Kleinberg (Ontario) one day and there I found a painting of a plane, full-on view.  That felt right for my float plane, so I sketched it in the gallery and drew my float plane design in the same image, coming forward towards the viewer.  In the nose of the plane I placed the black and white cloth picture of my father and his colleagues, left to right, Alf Caywood, Wop May the pilot, my father Al Black, Rex Terpenning the plane engineer and Carl French.  Alf, Wop and Rex Terpenning were later inducted into the Canadian Aviation Hall of Fame.  The Northern Lights material, which I found by happenstance in a lovely little quilt shop, in Creemore (Ontario), Creemore House of Stitches, was absolutely perfect for my project.  After this section which seemed to take a lot of creative energy from me, I stopped work on my design for a few weeks as the next section would be to depict the NorthWest Territories and I wasn’t quite certain how this would look.   However, it is never good to leave a design for too long or you tend to loose the creative force behind it.

Much of the NWTerritories biome is Tundra, with some Taiga to the south and with the Mackenzie River running northward from Great Slave Lake to the Beaufort Sea,  an extension of the Arctic Ocean.  I had a friend machine embroider my father’s ports of call so that people could envision his trip up the MacKenzie River from Great Slave Lake to Great Bear Lake.  Thus, how to portray the province in itself?  Then one morning I woke up with the image of tundra and earth in my mind and set out for my local fabric shop where I found a soft, earth-coloured flannette to use for the NorthWest Territories.  The last section, the Beaufort Sea was no problem other than dealing with the sky image.  I sought out the paintings of Lawren Harris, one of Canada’s Group of Seven painters and found inspiration for the sky in one of his paintings.

It’s always a let-down for me to finish a design, particularly something like this in which I’d become so emotionally involved in honouring my father’s memory.  Thus, in telling my story visually I became so wrapped up in what I had to say that I lost sight of its overall length.  The piece ended up being 144 inches in length.  Thus, it is not an easy quilt to hang in an exhibit, unfortunately.  It may be better displayed in a museum somewhere in Northern Alberta or the NorthWest Territories, I expect.

In transcribing my Father’s journal, several people have kindly contributed information in sorting out places, the type of float plane my father flew in, the tugboat he rode on and what it is like to travel along the rivers in the NWTerritories.  To Denny May, who wrote:  Wings of a Hero by Sheila Reid & Denny May and “More Stories about Wop May” by Denny May.  To my neighbours, Lin and Al Pace, of Canoe North Adventures and Northern Life Museum & Cultural Centre in Fort Smith, NWTerritories, my thanks for their help and support.  Part of transcribing my father’s Arctic journey was in trying to figure out just where the float plane flew my father to so that he could board the tugboat, the Radium King, to continue his journey up the Slave River into Great Slave Lake and the MacKenzie River.  I had always believed that Wop May had flown my father into the mouth of the MacKenzie River on Great Slave Lake.  Not so. My father’s journey began before this on the Slave River.  The Radium King, which my father travelled on, has had a long life of service in the north and is now at the Museum in Fort Smith where they hope to raise funds to restore it to its former glory.  Contributions may be made through:  http://thisplacematters.ca/project/save-our-king.